Sadly there will be no Carlisle Beer Festival in October 2022. The Committee are currently exploring the possibility of holding a Festival in 2023.

The Carlisle Beer Festival @ the Pub will take place during the period 3 to 13 March 2022. 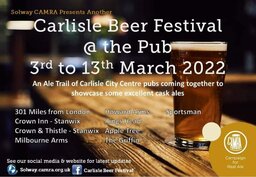 While we are showcasing a few of our City Centre pubs we would remind everyone that pubs have had a really hard time during the pandemic and if you are able to visit any of our pubs it would be appreciated.